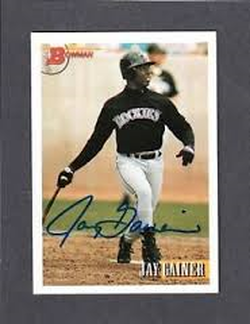 Jay Gainer began his professional career in the Northwest League with the Spokane Indians in 1990.

​He won the NWL batting title that season and let the Indians to the league championship. Jay reached the Major Leagues to play First Base for the Colorado Rockies in 1993 and he homered in his first big league at-bat (one of only 22 players to achieve that feat).

Jay played professionally from 1990-2001 and was a hitting coach and manager for the Arizona Diamondbacks' Yakima Bears and other Minor League teams.

He is currently the Head Coach of the A.C. Davis High School Pirates Baseball team in Yakima.
A  letter from Jay:

A letter from Jay Gainer:

I have been blessed to have played and coached in this wonderful game of baseball for almost 40 years straight. I began as a clumsy, 11 yr. old kid who was given the opportunity to play by a couple of great men back in my home town of Panama City, FL. Jim Stafford and Dave Goodwin.
Coach Stafford was my first little league coach and Coach Goodwin was my American Legion coach. They didn't have to help me, but they did. And so now I'm trying to pay it back! Thank you Coach Stafford and thank you Coach Goodwin! 40 years later, but never too late, THANK YOU!

More currently, I am being helped by a number of other great people here in Yakima, WA. They see the value in my attempts to pay it back. Or pay it forward! So again I am going to take this opportunity to thank them as well. So THANK YOU GUYS! Each and everyone of you who are too many to name, but you know who you are. Last, but not least, I must thank my wife, my family and friends for allowing me to continue in this game and give back some of the wonders I have enjoyed for so long.